Second Day in Morocco in the Atlas Mountains

The hotel provided a magnificent breakfast which consisted of hot mint tea, sweet orange juice, strong coffee, figs, croissants with three jams, grilled tomatoes topped with melted mozzarella cheese, eggs and thick pancakes which the lady cook showed me how to open and put butter & honey in them. There was also much more that I didn’t select! I wanted a picture, of the lady cooking in her scarf and gown, but she wouldn’t give me permission.

Hisham arrived at 8:00 and we rode to the Atlas Mountains around countless number of turns on a curvy road. The mountains were brown, rocky and had very little vegetation. I sat in the front seat the whole trip as my friend preferred the back and immensely enjoyed asking Hisham numerous questions about his country which he patiently answered. When we stopped for a break at a small store out in the middle of nowhere, I met a couple of ladies from Holland and another one from Switzerland. I used the WC (water closet) and a man at the entrance wanted money, but I didn’t have change for 100 dirhams. He let me go in after giving me a small piece of toilet paper as there was no paper in the stalls. I tried to buy a bottle of water and an orange (the oranges in Morocco are the best I’ve ever eaten!), but the store owner did’t have change for 100 dirhams (around $10) so Hisham bought the water and orange for me.

Many of the roads through the Atlas Mountains were under construction and it was very dusty so we rolled up our windows and turned on the AC. Previously, riding with the windows down had been very pleasant and breezy for while it was hot, the air was very dry.

Upon asking, Hisham told me about the Muslim religion, Allah, Torah, the prophet Muhammad and how they go to the mosque five times a day unless they can’t because they are not near the mosque. I asked him what he thought of Christianity and he said we should respect each other’s religion. I told him I’d been warned about Morocco and told to wear a wedding ring and men wouldn’t bother me. He said it is not true about men bothering women and I didn’t need a ring. I laughed and said that being old as I am, I didn’t have to worry about men bothering me anyway. It was fun talking to Hisham. I asked him about the young Swedish girls killed by four men in the Atlas Mountains. He said some of the nicest people he knows lives in the Atlas Mountains and that was a terrible thing and made everyone angry. He said the police caught the men the same day.

I liked Hisham a lot and it made me feel sad how Muslims are perceived in the USA. I don’t understand how a whole group of people can be misjudged based on their religion, ethnicity or nationality because of the bad actions of a small minority. It’s very sad to me.

We made another stop and watched women cracking nuts with a stone. The owner offered us some flatbbread dipped in honey, oil & nut mixture. I bought two crystal stones for €10. Hisham said they were fake and to let him buy for me in the future.

At the next stop Hisham showed me a real crystal which was white and it sold for €20. As we were driving Hesham turned on some Moroccan music on the radio and it consisted of a lot of drums. He changed the channel and they were playing older American music like, “If You Don’t Know Me By Now” and “Born Free”. It seemed very pleasant riding through the mountains with Hisham and my friend listening to the old American music.

A traffic jam from construction awaited us so Hisham turned off the AC and we rolled down our windows. It felt like Las Vegas…hot, dry and breezy.

Next stop about thirty minutes from Quarzazate, was Hit Ben Haddau, a castle located on the old trade route between the Sahara Desert and Marrakech with the oldest part being over a thousand years old. It was used in filming of Game of Thrones and numerous other movies like Lawrence of Arabia. The walk up to the castle was steep over uneven rocks and it was hot, dry and breezy. We had an interesting guide who told us about the Berbers and how he served as an extra in many movies. There were a few merchants scattered throughout the castle. One was painting a picture which changed colors as he held it over a flame. He wanted €50 for it. I offered €10, but he refused. I bought one for €5 from another merchant a little farther along. It pays to bargain!

We ate a delicious lunch in a lovely nearby air conditioned restaurant and I was finally able to get change for Euros. We traveled by the film studio called Hollywood of Morocco and continued on through the desert for two and a half hours to our hotel.

The trip seemed very long and as we got close I asked Hisham how much longer and he said two and a half hours. As I expressed dismay he laughed and said, “No, just thirty minutes!”. He was a real joker.

We stopped at a fabulous hotel for the night. The owner, the very handsome Muhammad, checked us in for the night. We were welcomed with mint tea and small cookies which tasted like animal crackers and then went to our room with AC. I put my luggage away and climbed the stairs to the top of the hotel to the lovely terrace passing a couple of cats on the way. The terrace was lovely with a view of the red mountains, curvy road going around and down the mountain and a valley with palm trees and a small river. The breeze was blowing and the view was pleasant.

Dinner was ready at 9:00 pm and, as always, it was preceded by bread and olives. I’d learned to pace myself and not fill up on bread. The dinner consisted of soup, delicious chicken and vegetables cooked in a clay pot. I asked for an extra large bottle of water to take back to my room as I’d been warned not to drink the tap water.

After dinner, I went back up to the terrace which was now dark but, clay pots with holes lit from within provided a little light. It all seemed rather romantic, but since I didn’t have a man, I walked around to get my ten thousand steps on my Fitbit and then retired for the evening and slept very well. 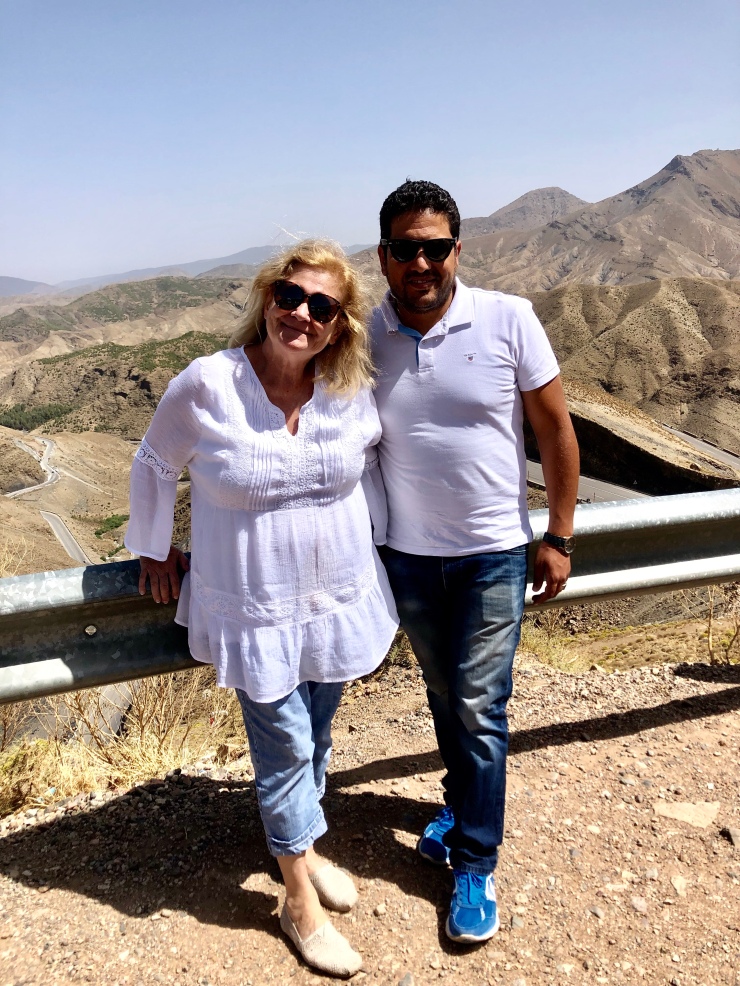 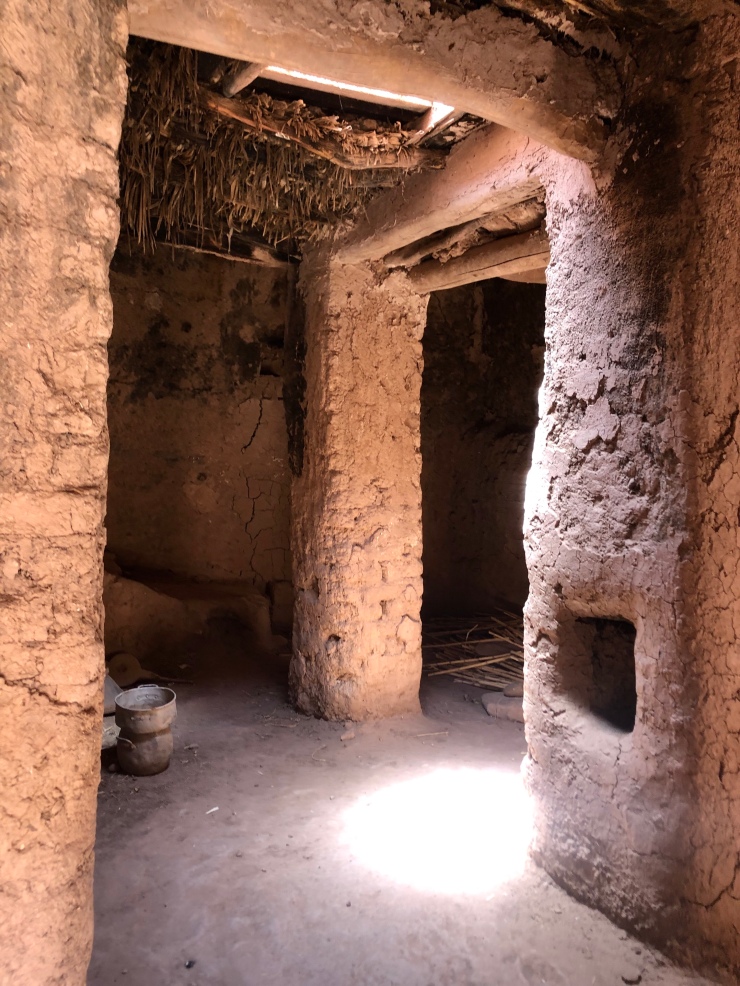 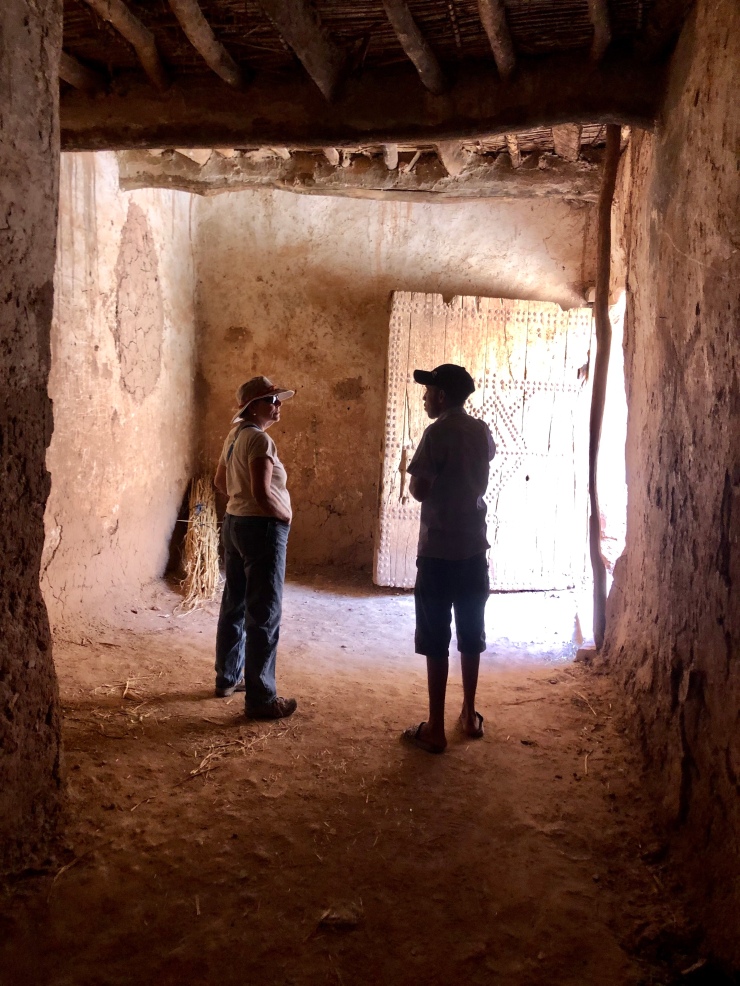 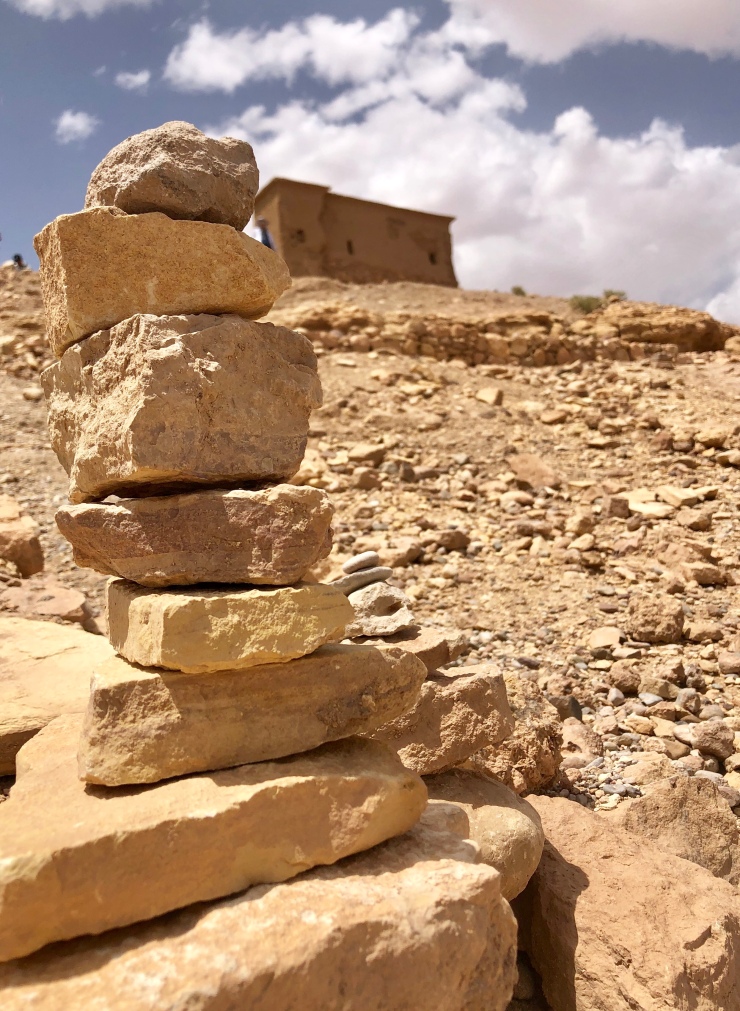 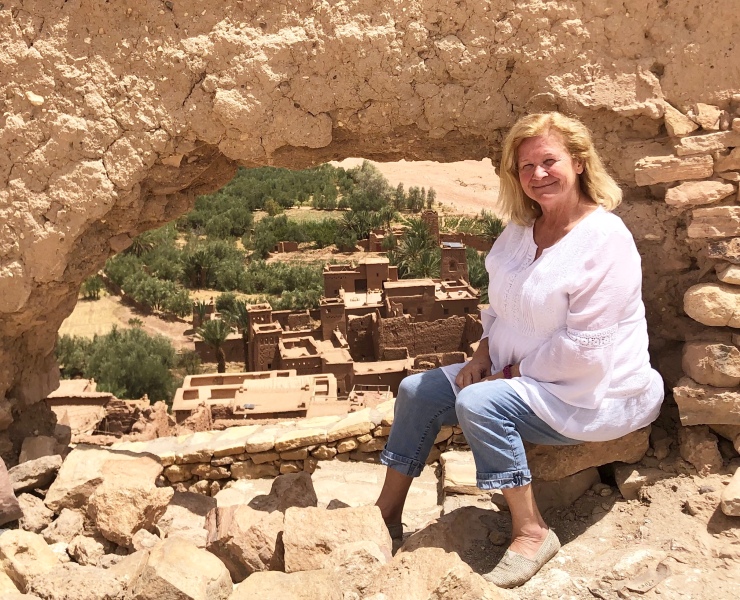 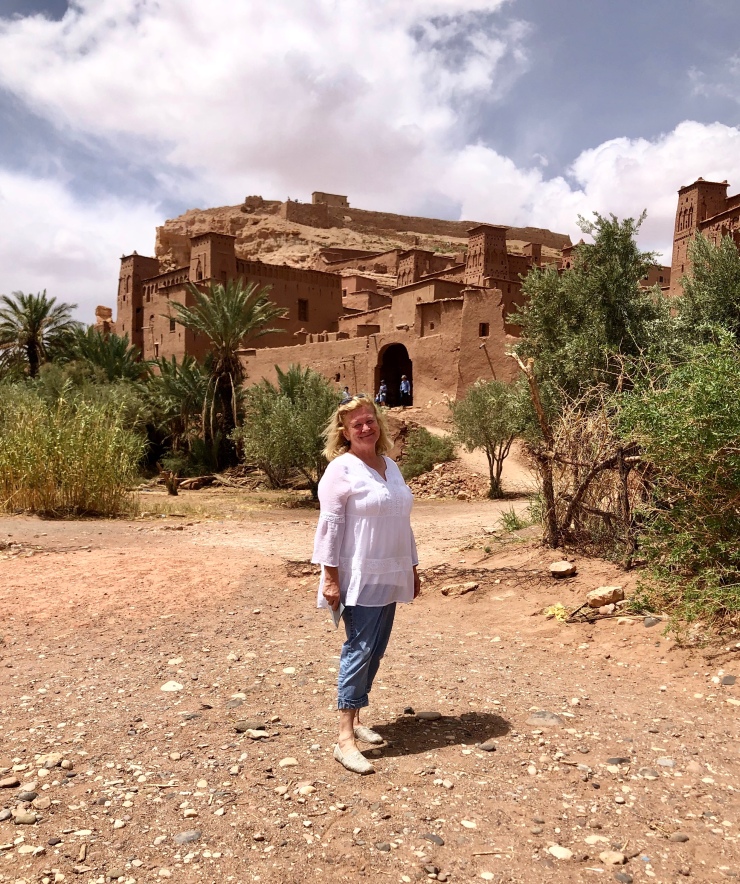 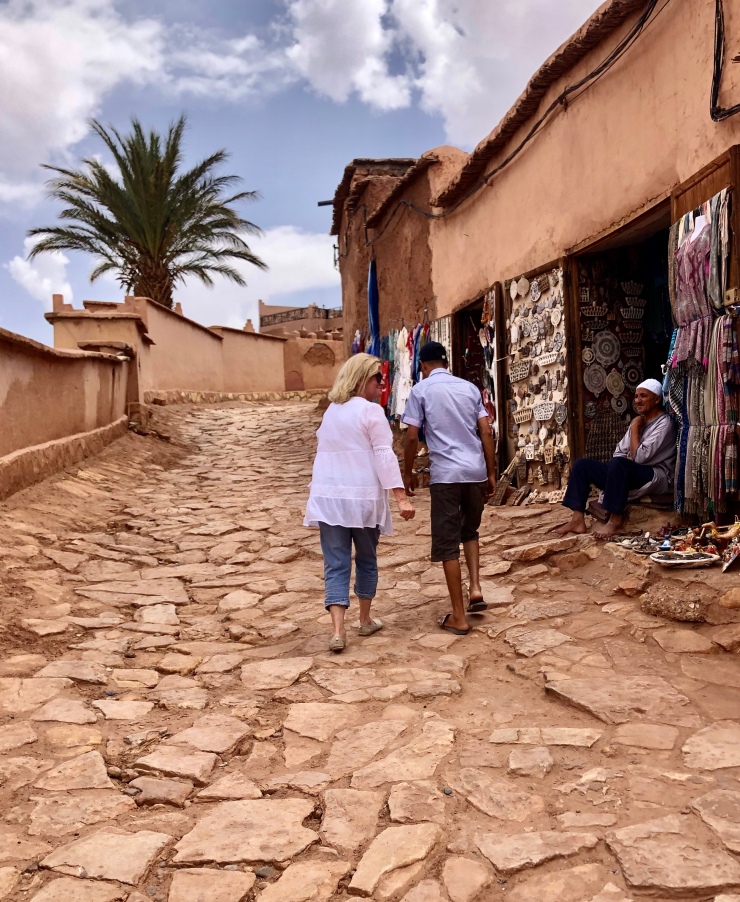 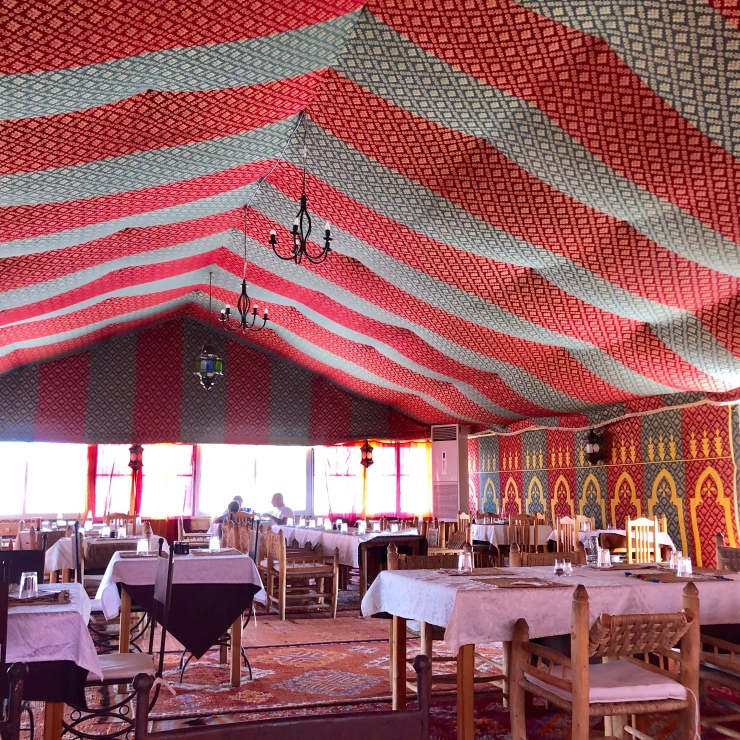 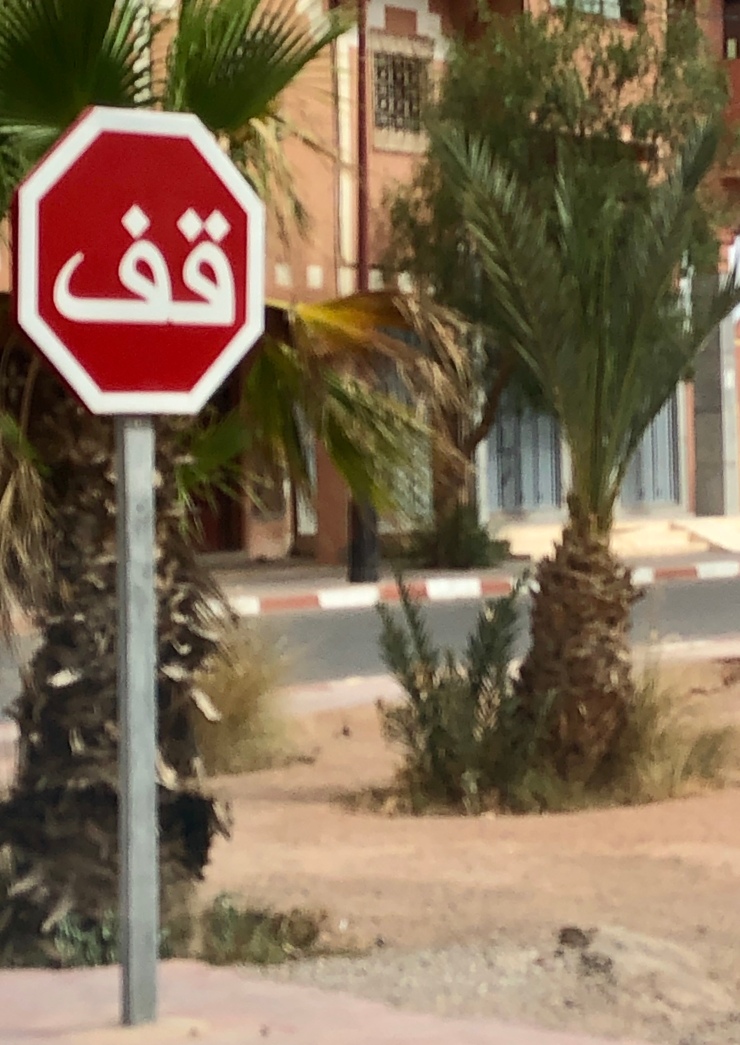 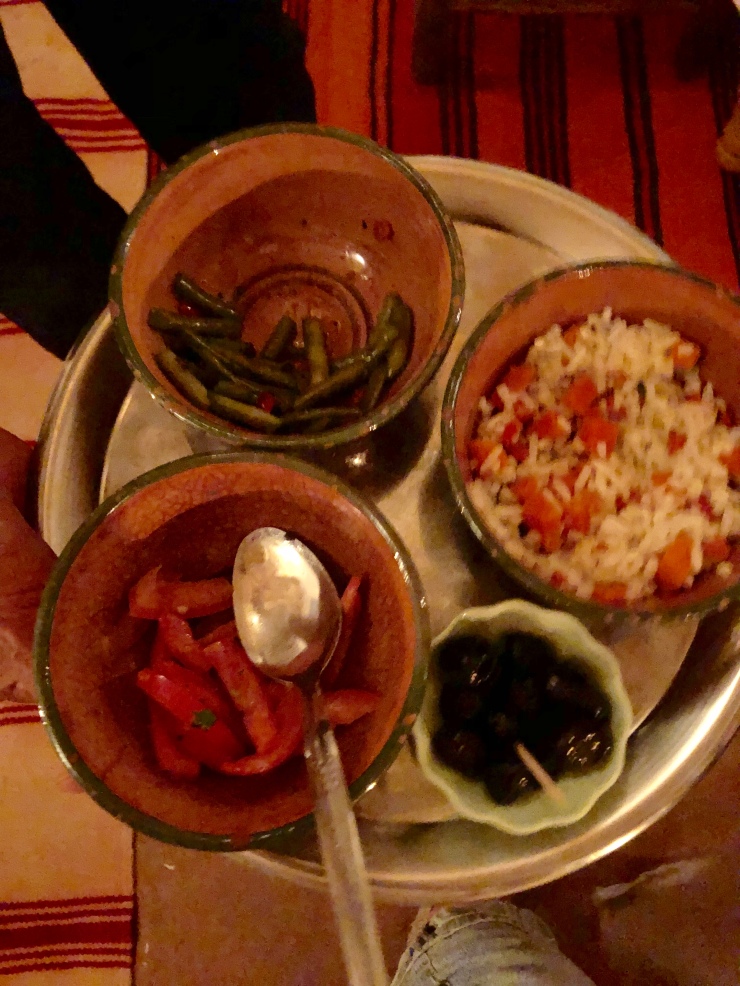 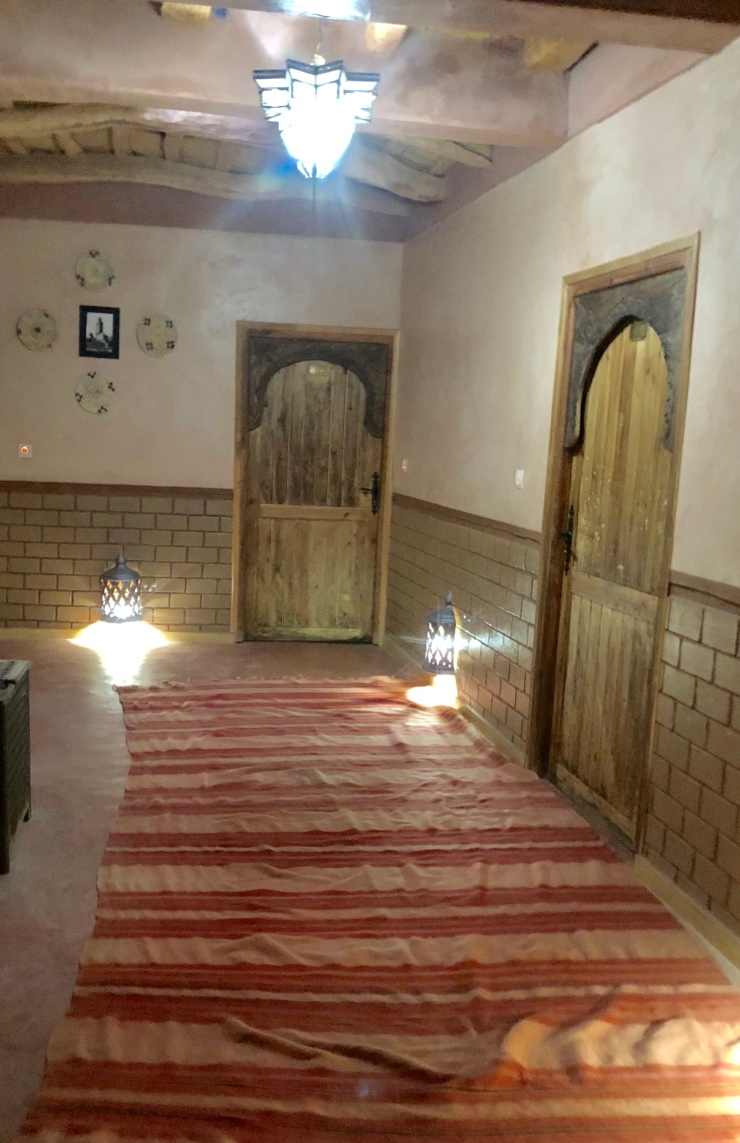 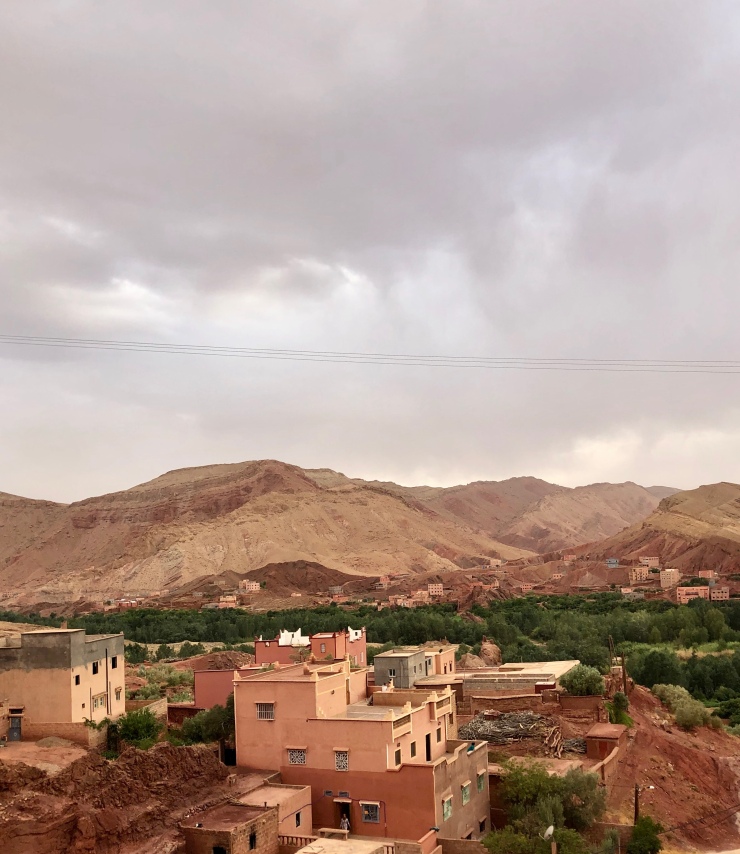 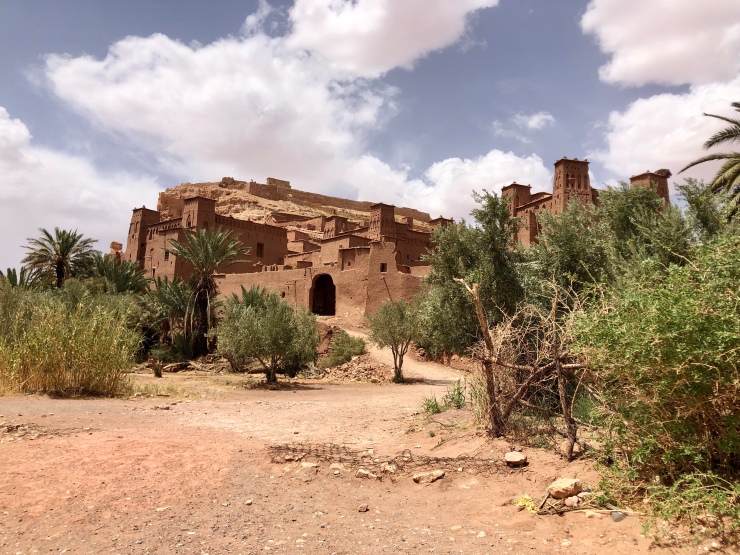 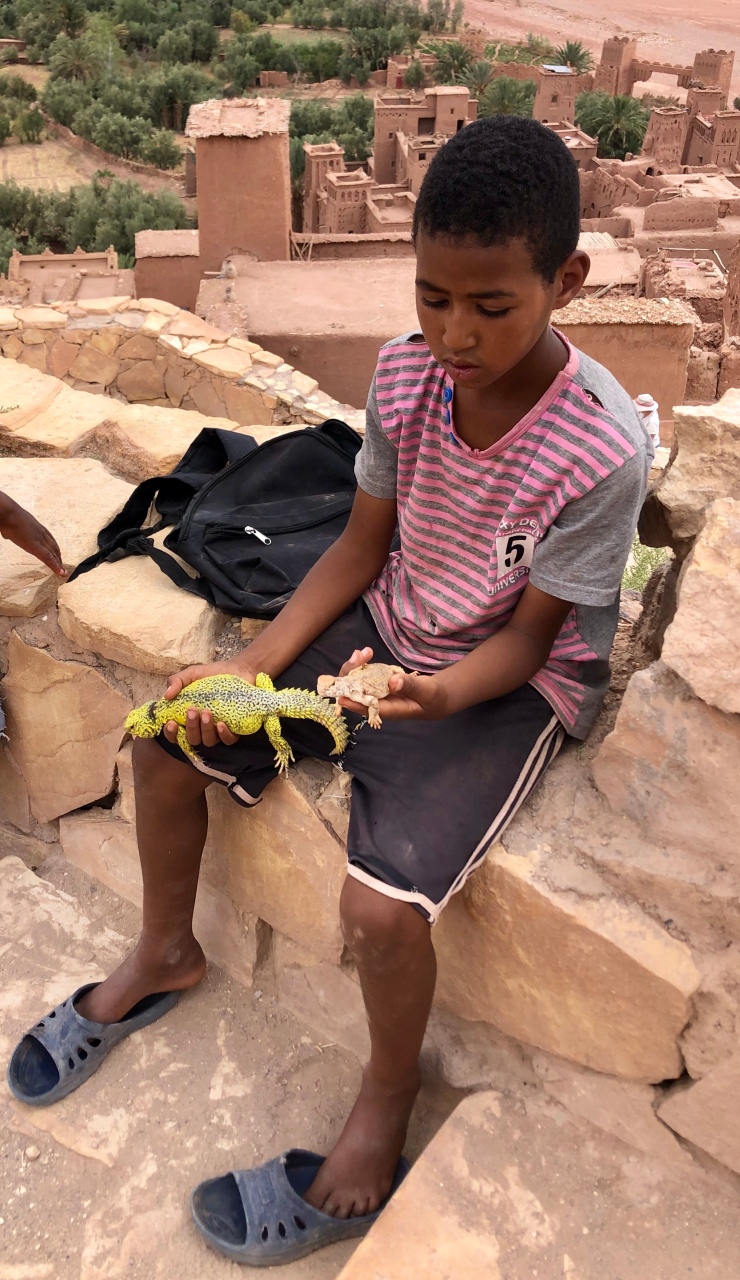 2 thoughts on “Second Day in Morocco in the Atlas Mountains”